No Kidding: Yoga Boosts Mind, Body and Spirit
by Elizabeth 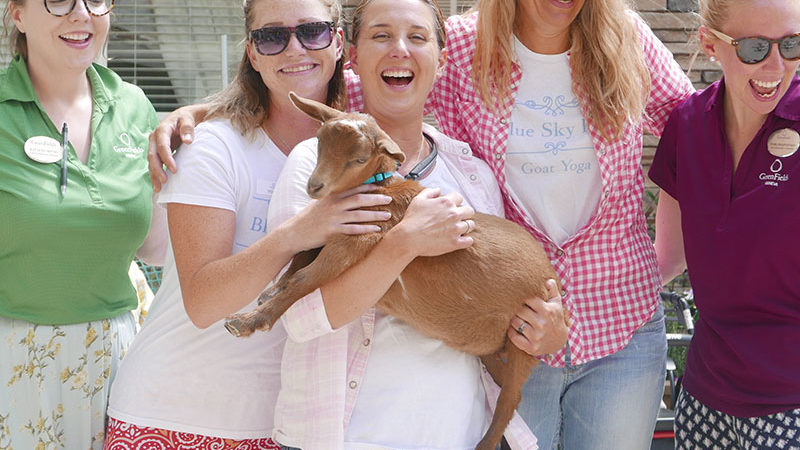 I got a surprising phone call from my mother, Virginia Martin, who is a resident of GreenFields, last week. That she called me wasn’t surprising (we talk almost every day); it was what she told me that was, well, different. Mom said she did yoga with a goat on her back. Had I not recently seen a TV commercial featuring a strangely dressed man doing that very thing, I might have thought she was pulling my leg, no pun intended.

A few weeks ago, as part of GreenFields’ SeniorFITness Recognition Week, goats were brought in from Blue Sky Farm in Sugar Grove to join residents in the practice of yoga, Mom explained. “Okay, but…why?” I asked her. “Because it’s enormously fun!” she said.

Still curious about how goats and yoga go together, I poked around a little on the Internet after our conversation. I learned that the presence of the friendly little animals, many of which are babies, is primarily to add a little levity to the practice of yoga. As Mom said, “It’s impossible not to laugh and feel happy with a bunch of baby goats jumping around!” Apparently, a goat on one’s back also intensifies a yoga routine, as its weight is just about ideal for the plank pose.

If goats were not innovative enough, I happened upon some other interesting concepts making their way into yoga studios these days. There’s beer yoga, in which an ice-cold beer is incorporated into vinyasa movements (sign me up!); dog yoga, where doggie and yogi are one on the mat; antigravity yoga, which involves a hammock to stretch the spine; and boxing yoga, which alters traditional yoga poses to relate to boxing moves.

While these contemporary additions to the sacred, ancient practice of yoga – its beginnings were established in northern India over 5,000 years ago – are decidedly fun and funky, they don’t detract from the fact that yoga is hugely beneficial, especially for older adults.

I read that physically, yoga improves strength and muscle tone without the strain as well as flexibility, cardiovascular and respiratory health. It also releases toxins, reduces stress, and improves the immune system by stimulating the “rest and digest” nervous system (the opposite of the “fight or flight” response) and fighting off bacteria and viruses.

Mentally, yoga sharpens focus and concentration and also decreases anxiety. Emotionally, its positive, non-competitive nature boosts self-acceptance and self-compassion; there’s even a saying: “Yoga is a practice, not a perfect.” Spiritually, yoga promotes a feeling of unity with self and the universe and helps us discover our “true essence.”

I was so excited to share all this with Mom, I called her back. As I was rattling off all I’d learned, she gently interrupted me to say that Kristin O’Connor, GreenFields’ SeniorFITness specialist, had already educated residents in the enormous benefits of yoga.

“But, thank you, Liz,” she said. “I’m thrilled to hear you’re as excited about yoga as I am!” She’s right; I am excited, and I’m also committed to taking up the practice myself. There are at least five yoga studios in Geneva and several in the nearby towns Batavia and St. Charles, where I grew up and still live with my husband and daughter Ava.

I’m not sure I’ll be tabling a goat on my back or bringing our pooch to class, but I’m inspired to delve into all that yoga can bring to mind, body and soul. 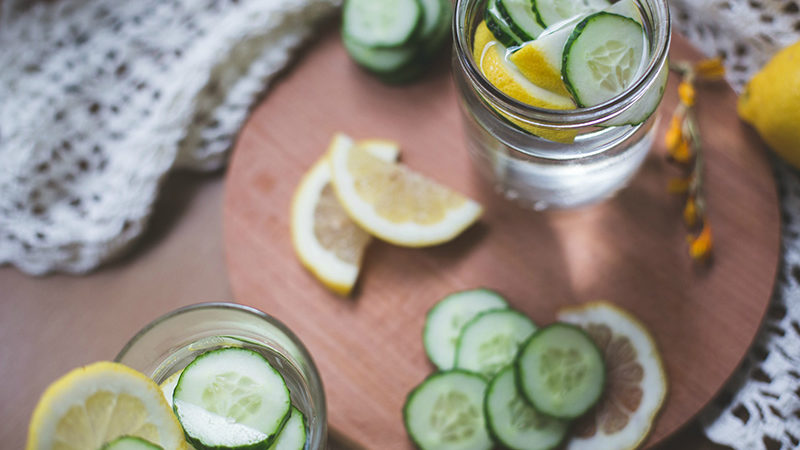 What's in the Water? Health and Hydration